So I changed my directions at Tulane. Since my interest was in music I would obtain a major in General Engineering with a Minor in Music. I went to Loyola University to take some music courses (they actually had a great music department). Then I moved to Baton Rouge to study music at LSU. I have to say it took me two years to unlearn what the music department there taught me. Needless to say that was the end of my college career for the time being.

But as luck would have it, I immediately went on the road with CC Courtney’s “Earl of Rustin”, a country rock musical. It was an amazing Play and an amazing experience. We played “Armadillo World Headquarters” in Austin for about six weeks and “Liberty Hall” in Houston for a couple of months. Then we went on to New York and opened on Broadway at the Billy Rose Theatre and lived at the Chelsea Hotel. I must say CC Courtney was brilliant and working with him and the whole cast was an amazing experience. After the Play in New York ran its course I moved back to Louisiana. I spent some time unencumbered by responsibility and started to concentrate on writing music. There is no secret that having your heart speak to your head takes time. Working out life’s ambitions is like a clock: “One Tick a Time”. I really love Leonard Cohen’s lyric: “I never had a secret chart to get me to the heart of this or any other matter”. But I could feel the pull. It became more obvious that it wasn’t a matter of making music but finding the voice of the music that kept speaking to my heart.

So I was living in Metairie in a fourplex with the piano in my bedroom and a reel to reel tape machine and mic on top of the piano (an upright). Living in a fourplex, my bedroom floor was the ceiling of someone else’s bedroom. I remember it like it was yesterday. One morning I awoke from a deep sleep at about 3 AM, walked over to the piano, turned on the tape machine and proceeded to play “Blind Captain” straight through while singing about 60% of the lyrics. No thought, just blind emotion. Then the neighbor started banging on the ceiling with a broom handle. I turned off the tape machine and went back to bed. If every journey begins with the first step this was it. In a moment I found my voice, the center of my story and my journey began. This was the first time I had sang and written a lyric that came from the center of my story – my being –. I was writing about my & life here began my Journal. Why my journal manifested itself in song to this day I’ll never know. 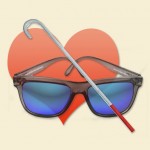 Why my early songs are mostly first person I still have no clue. But here was where my right foot stepped in front of my left and I never looked back. I do wish I could apologize to the couple that lived downstairs.

View all posts by John Bergeron →
Listening to Music in the Digital Age.
IT’S NOT THE WRITER