Maybe it was a natural progression. I know from my mother that she started teaching me about the piano at age 5. Of course, I don’t remember but knowing her she made it like a game. She was a natural teacher, having taught first grade throughout her life. I figure it was the gift of all gifts to be exposed to music at the piano (a Lester Spinet) before I knew what I wanted so it was just one more thing we did. Probably the hardest part of being a musician is to start an instrument when you are older.

The trick is to get over the hump of hearing music from the playing and older beginners are usually a bit impatient. So when my mother, Ruth, knew it was time (probably about age 7) she put me with a piano teacher and the adventure began.

I can’t remember a time when I didn’t play the piano. As time passed, I grew to love it more and more. Even as a child it seemed to be my refuge, my escape to another world. My timeline is sketchy but I believe I was starting to experiment with different melodies and chord progressions around the ages of 9 to 12. And by the time I was 13, I was playing in a combo. When I was 14 our band, “The Rhodes” (so named because I bought the first Rhodes Piano in the South – serial number 78 – give or take a number or two). 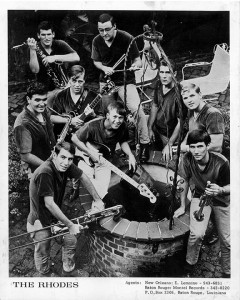 My mother got permission for us to start playing at a bar from the mayor. It’s amazing to think that I was playing in a club when I was only 14 years old in a nine member band with four horns. I know we were young but we rocked. What a great sound to have a horn section. I did the arrangements, so when I moved to New Orleans at 18 to attend Tulane I was doing horn and string arrangements in the studios.

The progression was natural and opportunities kept presenting themselves. I remember it being quite challenging to juggle time at the studio and keep up at Tulane. One was my passion and one my obligation.

Another part of me started to evolve. I began writing instrumental songs at the piano at the frat house. Thus my true safe house came to being. I probably drove the guys around me crazy but I never noticed. Four of those songs were recorded by a very popular artist in New Orleans, Ronnie Kole.

The pull to my eventual calling continued to grow. I remember spending many a moment under the oak trees in Audubon Park across St. Charles Street working through the dilemma of what was becoming a choice between making music and the expectation of finishing my Electrical Engineering Degree at Tulane. But you can’t keep a deer in a cage and you can’t dictate which way your heart flows.

View all posts by John Bergeron →

The Music Inside the Music.
IN THE BEGINNING Part Two